My new found friend and author, Sandra Merville Hart shares insights on her new book, “A Stranger on my Land”. If you are drawn to the Civil War era, this book is for you! 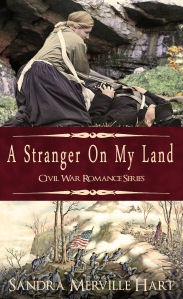 Carrie and her little brother, Jay, find a wounded soldier on their land after a battle which later became known as “The Battle Above the Clouds.” Adam, a Union soldier, has been shot twice in the arm. Though Carrie is reluctant to take Adam to their cave where her family hides their livestock from both armies, she cannot turn her back on him.  But her Aunt Lavinia, bitter over what Yankees have done to their land, urges Carrie to allow Adam to die. Carrie refuses, but cannot remove the bullets. Adam’s friendship with Jay softens her heart toward him. It’s not long until his gratitude and teasing manner spark…

We’ve all heard that laughter is the best medicine. I recently sent a friend of mine a card saying that laughter keeps you healthy. One pharmaceutical prescription instructs the patient to ‘take two ha-ha’s with a dose of sunny wishes and happy thoughts. Probably hoping they will soon be a “smilie” instead of a “frownie”. When we send get well cards our intention is to make them feel better. Nowadays it’s so easy to send well wishes by texting, Facebook posting, email, twitter, tweet…you get the picture. It’s instant and no postage needed.
As much as we would like to believe the old adage, we know in our hearts that laughter is not a cure all. It is often used to cover up the deepest, dark sadness that has a strangle hold on a person. Often, the reasons for the sadness which some carry within themselves are buried as deep as the sadness itself.
During my journey on Planet Earth I have enjoyed many comedians in the entertainment industry: Bob Hope, Sid Ceasar, Don Knotts, Tim Conway, Red Skelton, Carol Burnett, Lucille Ball, Imogene Cocoa are a few who come to mind. If you were to look closely at each one’s life you would find an area of deep sadness. Red Skelton publicly fought his demons and chased them by painting clowns who had tears running down their faces. Yet, he was one of the funniest character comedians to ever cross the stage.
All of us have chased our own dark demons at least once in our lives. They come in many forms, shapes and sizes. For most people these demons come and go because we don’t allow them to settle deep inside our souls.
When the darkest demons are combined with drugs and alcohol they can often become lethal to the carrier. No one seems to have the answer as to why this happens. It’s as though that when who they really are surfaces and becomes real theycan’t cope with it. What is it that lies in someone that makes them so sad and lonely that they have to destroy their being?
There was a song that was on the pop charts several years ago called, “Send in the Clowns.” The word to that song never really made much sense to me, but the last measure of it was, “don’t bother, they’re here.” So, is everyone a clown that masks their true being? We all have a touch of clown in us. How many times have you told someone to stop clowning around?
Let’s face it. What makes a person so deeply depressed that they would even think about suicide is called Mental Illness. It is real. It is a fact. And it is time we all acknowledge that it is what it is and treat it as such.
I’m saddened by the death of Robin Williams. He was a comedian in the truest sense of the word. He made us all laugh, but he couldn’t make himself laugh. I’m sad that he felt his life was empty and hopeless. He was the clown who couldn’t laugh.
Have I ever experienced dark sadness and unhappy valleys in my life? You bet I have. But thankfully, God walks beside me when I’m going through these tough times. Deep, dark, sad places happen to all of us. It’s how we deal with them that matters. If you feel you are in a deep, dark, sad place then talk to someone about it. Get the help you need. It’s never too late.
Robin Williams, too soon gone. May you rest in peace.